1. How cost effective is billboard advertising compared to other media?

Billboards are generally far more cost effective because the ad is usually viewed 24 hours a day, 7 days a week and 365 days a year (depending on your contract). Magazine and newspaper ads are generally published once a week or once a month, and the ad is generally viewed only once. A radio spot may air a few times throughout the day, but statistics show that many listeners change stations during commercials. Generally speaking, advertisers can get the most from their ad dollars through effective billboard advertising.

The chart below reveals the CPM (Cost per Thousand) for the various mediums. You will see that outdoor advertising is the least expensive advertising medium in terms of cost per thousand. This is due to the very large readership which is obtained from only one ad. 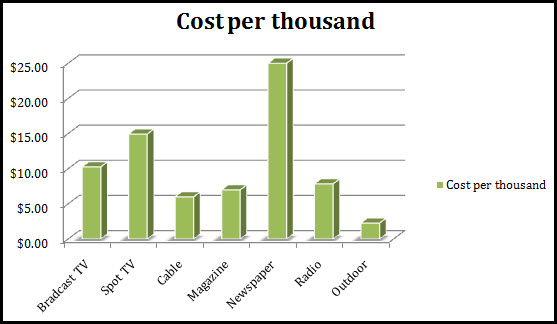 2. How many people view billboard ads compared to other media?

Based on the Total Media Spending Research by Universal McCann in 2009, the following percentages represent the amount of different types of media the average person living in the United States consumes each week:

Billboards run a close second to television consumption, however it is less expensive than almost every medium listed above with regards to pay-per-view.

3. What is the difference between static, trivision and digital billboards?

Static billboard: A traditional billboard, where the ad is printed (usually on vinyl) and installed onto the billboard structure. The advertiser is provided 100% of the allotted space during the contract term.

Trivision billboard: A billboard that rotates between three advertisements on one structure. Each ad rotates about every 10 seconds. Although the advertiser ‘shares’ space on this type of unit, the movement captures attention of all passers-by thus still attracting great readership.

Digital billboard: A billboard that generally features multiple advertisers on a large digital screen. Artwork can be changed as often as needed without incurring the cost of printing production and installation. Various ads may be featured on a rotating basis. This provides many benefits and virtually unlimited marketing options. This includes the ability to pre-schedule various promotional and seasonal ads without added production and installation costs.

4. How soon can I expect to see my ad posted?

This depends on how long it takes to design the artwork that meets your satisfaction. In most cases, once the artwork is approved your ad will be posted in as short as 3-5 business days. We can complete your artwork in as little as 2 days, but sometimes it can take up to 2 weeks, depending on your number of revisions. We work as quickly as possible to get your ad posted, however you should estimate between 10 and 21 days from signing to see your ad posted.

5. Will I need to hire my own graphic designer?

You are not required to hire a designer, but this is your option. We have a talented design team which specializes in outdoor media artwork. Our knowledgeable sales people also specialize in creating effective billboard messages and ad concepts and they work together to create a message which will bring you results. We include the design consultation and the design labor in our print production cost, as part of an inclusive package thus saving you time and money. Of course, if you have another designer you would like to use, we will gladly accept outside artwork provided it fits the billboard format and size specifications (we can provide you with these specs).

6. What are the costs involved in having a billboard?

We make it easy for you in terms of cost and payment. There are essentially two costs: your all inclusive production fee which covers your ad design consultation, design services, material printing/production and installation. Once your billboard ad is installed, you pay a rent on the space which is billed on a 4 week billing cycle.

Mahalo Marketing, Inc generally bills every 4 weeks via regular invoice; however we will also provide discounted rates for advertisers who wish to pay for the advertising contract term in advance.

8. Will I receive a discount for buying several billboards?

Absolutely. We will tailor a competitive package for you which will provide you with discounted rates for buying a multi-board campaign.